"Capitalization rules are so cruel to words in the middle of a sentence." - Margo to Q about her list

Margo Roth Spiegleman is a teenage girl in the novel Paper Towns by John Green. Always mysterious, Margo has made a reputation for herself known as popular, smart, and beautiful. Played by supermodel and actress Cara Delevingne, Margo's story is about self discovery, true friendship, love, and mysteries.

Margo moved into Quentin's neighborhood when they were both children and has lived in Jefferson park for twelve Years. Both Quentin and Margo used to ride bikes when they were younger, which Quentin saw as a way of talking/hanging iut with her. Although their friendship remained strong for a many years, they slowly drifted apart when the two entered high school. As a child, Margo loved mysteries and investigating. When they found the dead body of Robert Joyner one afternoon at Jefferson park, upon believing that you closed your eyes when you died, Margo suddenly embarked on a mission to understand why he had committed suicide. Climbing up to young Quentin's window one night, Margo insisted that she had Figured out the reason for why he had killed himself, the reason being his divorce. After imploring that he accompany her to their local SeaWorld, Quentin, always playing it safe; refused, stating that he "didn't want to get into trouble". Margo left his window disappointed with the last sentence they Would speak for many years "all his strings broke." From then on, Margo has unknowingly remained the primary love of Quentin Jacobson of many years. All whilst dating popular jock Jase Worthington during her time at Jefferson park high school, Margo reveals in the end of the book that she had loved Quentin too. 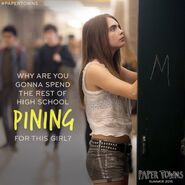 Margo and Quentin getting revenge on her ex-friends

Margo appearing to Quentin in a dream

Connecting over their accomplishments
Community content is available under CC-BY-SA unless otherwise noted.
Advertisement